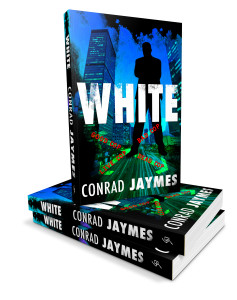 At the start of the new millennium the world’s media coined a phrase — The Heroin Drought.

And while the impact on drug supply was widely reported, the story of what led to this scarcity has never been told — until WHITE.

In this brutal & gritty thriller Conrad Jaymes takes us into the darkest corners of the drug war & introduces us to some of her combatants: Peter Balino — a tough, complex man, haunted by his past, unsure of his future.

The Say Tong — the most powerful criminal organisation in East Asia, run by men of knife-edge ambition & cruelty. Men known as Snake Eyes, The Vampire & The Giant.

This is a story for fans of true crime.

A story born in the headlines.

A story so real it just might be true.